I wear a couple different hats when I think about and I work in food, but today we’re taking a little bit of a different take on this. And really, let’s set this up with thinking about the two most intimate things we do in our lives that both start with the letter F.

The one I’m talking about is when we feed.

Food is a very personal experience, but it’s not an experience that ends with ourselves. The impact of everything we consume resonates throughout the world around us. Every bite we take, everything that we buy at the store impacts our society and the environments at a global scale. Throughout history, technology has entered the picture in order to adjust or transform the way that we protect and secure and feed one another. And it’s really the ways that we use technology that will decide whether or not these pieces converge or create conflict.

In 1970, we awarded the Nobel Prize for the father of the Green Revolution, Norman Borlaug; this was a super exciting time. Norman Borlaug he came in and the world was growing its population at a rapid pace, we were on the brink of famine and starvation all over the globe and we had no way to feed people. So Norman Borlaug and other researchers and scientists, they came in, they said, we’ve got to fix this problem. This is a big problem; we need to figure out how we’re going to feed a billion people who do not have food coming their way. And so they intensively invested in developing new strains of grains and rice.

So they bred all these new types of grains, and they developed strains that were resistant to rust, which is a disease of wheat. They grew dwarf strains in order to avoid the shafts or the stocks of wheat from collapsing in bad weather and ruining a farmer’s crop. And more importantly, they produced wheat that could grow in high yield, right? So suddenly, we could use the same amount of land to grow tons and tons and tons of food and solve this problem of global hunger.

What they didn’t think about was the fact that they needed to have a lot more water. These high yielding strains required huge resources in order to grow, and in order to accelerate the growth of these strains of grains, we needed to throw in synthetic chemical fertilizers. So suddenly, we created new industries where we needed to have all these additional inputs in order to grow grain. So for a short term, we did save the lives of a billion people from starvation but what we didn’t do was consider the impact on those lives in the longer term.

Suddenly, we had farmers in Southeast Asia, South Asia, going into debt because they couldn’t afford fertilizer. We created more disparity within those populations between the rich and the poor. We destroyed the soil that they were growing their crops in because we use too many chemical fertilizers and the technologies we developed weren’t actually good for the environment. And the list goes on and on. So the question is, how did something that started so good go so bad?

We have the Green Revolution, the goal was to feed; the goal was to produce enough food to make sure that the world was going to be okay, and suddenly we created a whole series of other problems. We had the world’s brightest people come together and solve a problem that was optimized around abundance of food; the problem they were solving was solved. They needed to figure out how to grow as much food as possible and that’s exactly what they did. The trouble is, they just kept going, and they overshot that goal and it continued until today, where we live in a world where we grow so much food that we’re able to send 30% of everything we produce to waste.

We grow so much food that we could actually feed 11 billion people, even though we only have 8 billion. Yet 800 million people on the globe today struggle with hunger. How did we end up in the situation of too much food? This is an example of technology over optimizing around an objective, and this is very typical of us as humans. We are very outcome oriented, so we say, hey! This is the goal, let’s throw all of our resources and screw everything until we get there, and then we get there but then we realize, hey! We’re being super successful at it and we feel we have to keep going further.

We forget to start looking at context, and we have a lot of inertia in us and are very resilient to change. So what happens today? Today, all of us obviously eat, we all exist on a day to day basis, we obviously have all seen that there’s a huge movement in the ways that people are changing the ways that they eat. One of the biggest things happening today en masse, is the shift from animal based proteins to plant based proteins. So what if we actually said, hey! Let’s optimize this entire system now around things like sustainability.

A lot of the motivations for why we’re shifting from animal proteins to plant proteins are incredible. 70% of our arable land today is used to feed cattle. That’s an incredible amount of food that’s being used in an inefficient way to grow more food. In fact, in the United States, the amount of feed that is grown in order to feed cattle could feed 800 million people, which is in fact the number of people that are going hungry today. So the system is inefficient, so maybe an optimization around sustainability makes sense, maybe we should eat insects, because they require fewer inputs, they require less feed, less water, less energy, less of everything in order to grow and provide protein, and could be very sustainable as a source for us to exist on.

But what if we extend this another 20 years out? And we keep optimizing around sustainability, and we start saying, hey, You know what? Actually, there’s better ways of doing this, because those still require maybe some transportation, those kinds of things. Maybe we should be growing everything right here, right now. And we have technologies currently being developed around lab grown proteins and lab grown meats. What does it mean to grow a steak in a laboratory? We’re using 50 years of tissue engineering research right now in order to try to grow a lab grown hamburger. Okay. Makes sense.

Unfortunately, all those 50 years of research were focused on human tissues. So suddenly, we’re now having to repeat the entire process to figure out how to grow beef tissue, chicken tissue, fish tissue, all these other tissues of foods that we like to eat. Well, if we are in fact optimizing around sustainability, well, that would suggest we shouldn’t do all that research, and maybe we should just grow human steaks. So if we follow this line of always optimizing around a single objective, we risk sending ourselves towards dark places. I don’t know how many of you would actually eat a human steak?

Somebody must, no nobody. Okay. This guy, perfect! But this is very real. So let’s take another direction with this system of optimization and it’s a great way to kind of think about this. What if we optimize around health? The foods that we consume today are not all created equal. And that’s a fact. You go into a grocery store, not every head of lettuce you see, has the same nutrients inside of it. There is a difference between organic and conventionally grown foods. Those things will transform you as an individual in a different way. And there’s incredible work being done in this space.

We have people who are figuring out personalized produce. People who are saying, hey! We need to come in and grow the nutrients and nutrition and all the vitamins that you need, and so you’re going to be able to get a head of lettuce that’s exactly designed just for you. Incredible! But what if we go further with it? What if we genuinely optimize around health? Well, how are we going to get that information? Suddenly living in a world where everything is optimized around health suggests that, well, suddenly I need to know the status of every individual’s health. How would I do that?

So this is what brings us back to this question of technology and the ways that we could lead to convergence or conflict. There are beautiful ways that technology can integrate within our lives and build towards an abundant future. But where the conflict begins to reside is how those technologies are optimized, and what they’re optimized around. And fundamentally, it’s the individuals who create those technologies that imbue the ethics and morals of those technologies. And that becomes the decision we have to make as a society, is who’s making those choices. Thank you very much.

Dr. Irwin Adam Eydelnant, SingularityU Canada Faculty, Futurist, Co-Founder, Future Food Studios
Irwin explores the challenge of feeding an additional three billion global citizens by the year 2050 and how technologies new and old are coming together to define the future of food. Food is at the epicentre of exponential technological transformation and already being redefined by artificial intelligence, blockchain, robotics, and synthetic biology. With food at this intersection we are witnessing a Second Green Revolution that is evolving what we eat, what food is, and how food is produced.

Dr. Irwin Adam is a creative scientist and food futurist who combines a background in engineering, biology, and technology with his passions for eating and design in the exploration of global eating futures. He is a thinker and maker who creates defining multi-sensorial food experiences including products, new technologies, immersive dining installations, and interactive workshops. As Founder and Creative Scientific Director of Future Food Studio, Dr. Irwin Adam leads multi-disciplinary teams in re-imagining how we interact with food at every scale. Major projects have included Museum of Ice Cream (NYC/LA), wndr Museum (Chicago), Food Loves Tech (NYC), and Sensorium (Toronto). Brand collaborations include Pepsico, Unilever, General Mills, Campbell’s, Kraft, & ABI InBev with projects in the US, Canada, Middle East, and Europe. 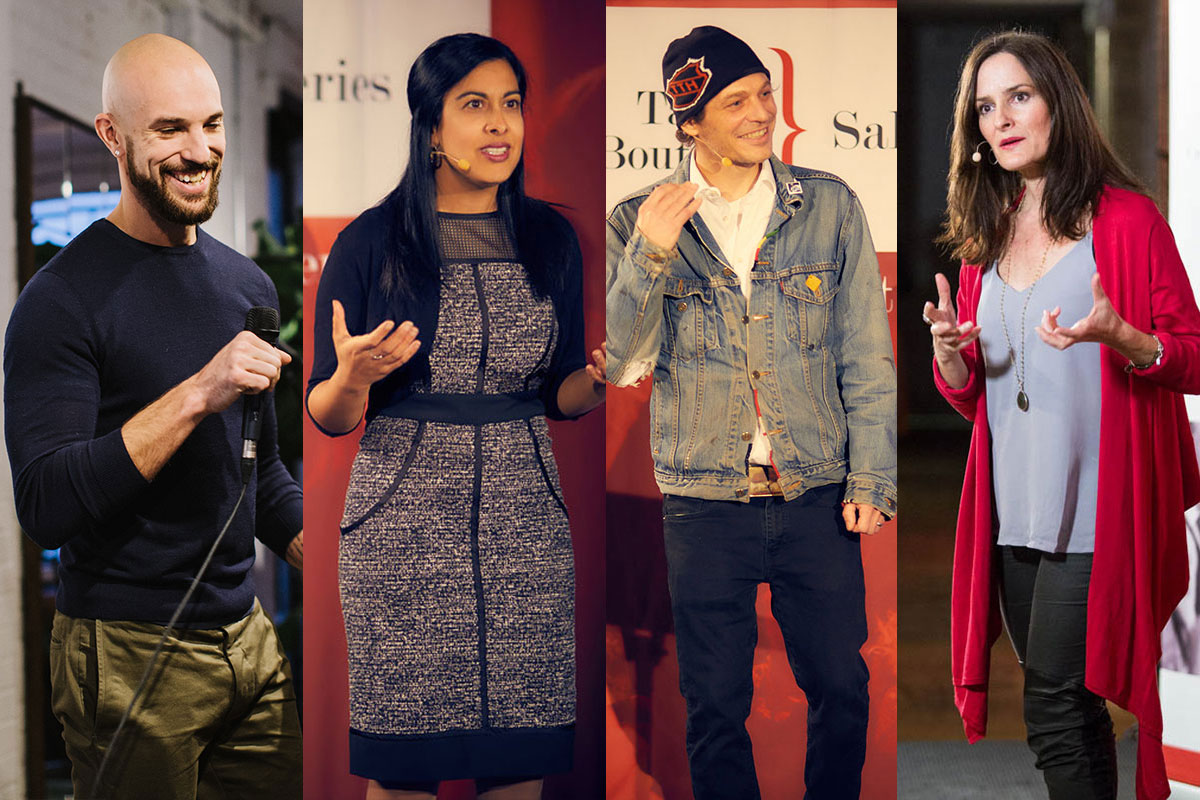 We are extremely proud of the speakers we represent and believe that they will benefit your next event.

Sign-up for our newsletter to be notified when the next Salon date is announced.